The U.S. dollar came to life in 2014, after years in the doldrums. It gained dramatically against many of the world’s currencies, creating a buying opportunity for dollar-holders that was unprecedented in recent memory.

Those of us in the property investment business sent out weekly tirades, urging readers to take advantage of the buying opportunity… and frankly, thousands of you did exactly that.

But what about today? Does the U.S. dollar still hold a big advantage?

The short answer is yes… even though the U.S. dollar is off its peak against virtually every currency, it still has strong buying power in certain markets… far more buying power than it had in 2013. But in other markets, while the U.S. dollar still holds an advantage, that advantage is significantly less than it used to be.

Let’s look at the U.S. dollar’s performance since the run-up, and see where the bargains lie.

The U.S. Dollar Made An Impressive Gain Starting In 2013

As an army of newsletter writers were predicting the U.S. dollar’s demise, the U.S. dollar made an unexpected turnaround in 2013 and 2014. It started climbing against many of the world’s currencies (and the U.S. dollar index) at an impressive rate.

This resulted in a rare opportunity for property investors, who suddenly found properties available abroad at a huge discount, in U.S. dollar terms.

At the peak of the U.S. dollar’s run-up, buyers in Brazil saw an increase of almost 100% in their buying power, using 2013 as a point of reference. Colombia was not far behind, and even Europe wound back the clocks to rates not seen since 2003.

How many people bought at the peak?

Some did, but not as many as you might think. Many buyers don’t want to buy at a good rate, because they’re waiting for the best rate. And unfortunately, you never know what the best rate is until after the fact, so most people miss the peak.

When taking currencies into consideration prior to a purchase, I suggest that you look at where the exchange rate is by historic standards… and not try to pick the perfect moment.

Here’s a chart showing the increase in the U.S. dollar’s buying power at the peak of the U.S. dollar’s climb (a peak that occurred at a different time for each currency), along with how much of that increase has been lost as of today.

*Peak exchange rates occurred at different dates for each currency
At the peak of the U.S. dollar’s performance, buyers realized almost a 100% increase in some markets. In the right-hand column, you can see how much of that increase has eroded as of today.

Here’s What Happened With Major Markets Over The Past Year

The past year has been somewhat stable in Latin America, while the U.S. dollar lost significant buying power in Europe, Canada, and the U.K.

Brazil was the only country where the U.S. dollar actually gained buying power, while Colombia was unchanged. The most dramatic loss of the U.S. dollar’s buying power was against the pound sterling, as investors set aside some of their Brexit fears.

Here’s a summary of what happened over the past 12 months:

Brazil was the only country in my survey where the U.S. dollar gained in buying power

Forget The Past: Here’s Where Your Buying Power Lies Today

There is no value in fretting over the past, and worrying about what the U.S. dollar used to buy. The important thing today, as I mentioned, is to keep the U.S. dollar’s buying power in historical perspective. In other words, don’t worry about missing the peak. Take stock of where the U.S. dollar is today. As you’ll see, there are still some strong currency bargains out there.

Colombia has retained the strongest buying power for buyers with U.S. dollars. As of today, dollar-holders still have 67% more buying power than they had in 2013. This is the best deal out there, among the countries and currencies that I follow. Today’s US$100,000 purchase cost almost US$167,000 in 2013.

Brazil comes in close behind Colombia, with U.S. dollars sporting 54% more buying power than they had in 2013. Today’s US$100k purchase in Brazil would have cost you US$154,000 at that time.

Here’s how the Colombian peso and the Brazilian real performed against the dollar. Note the similarity of their curves. 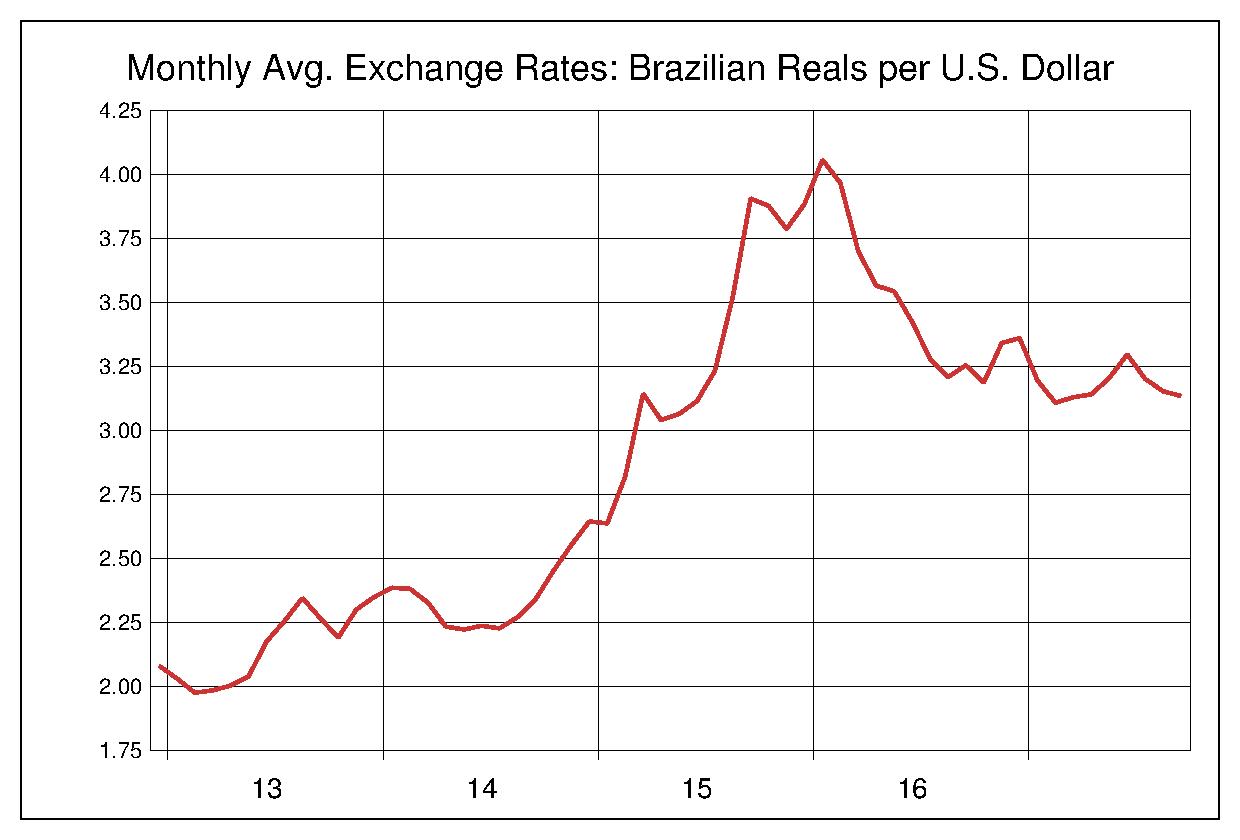 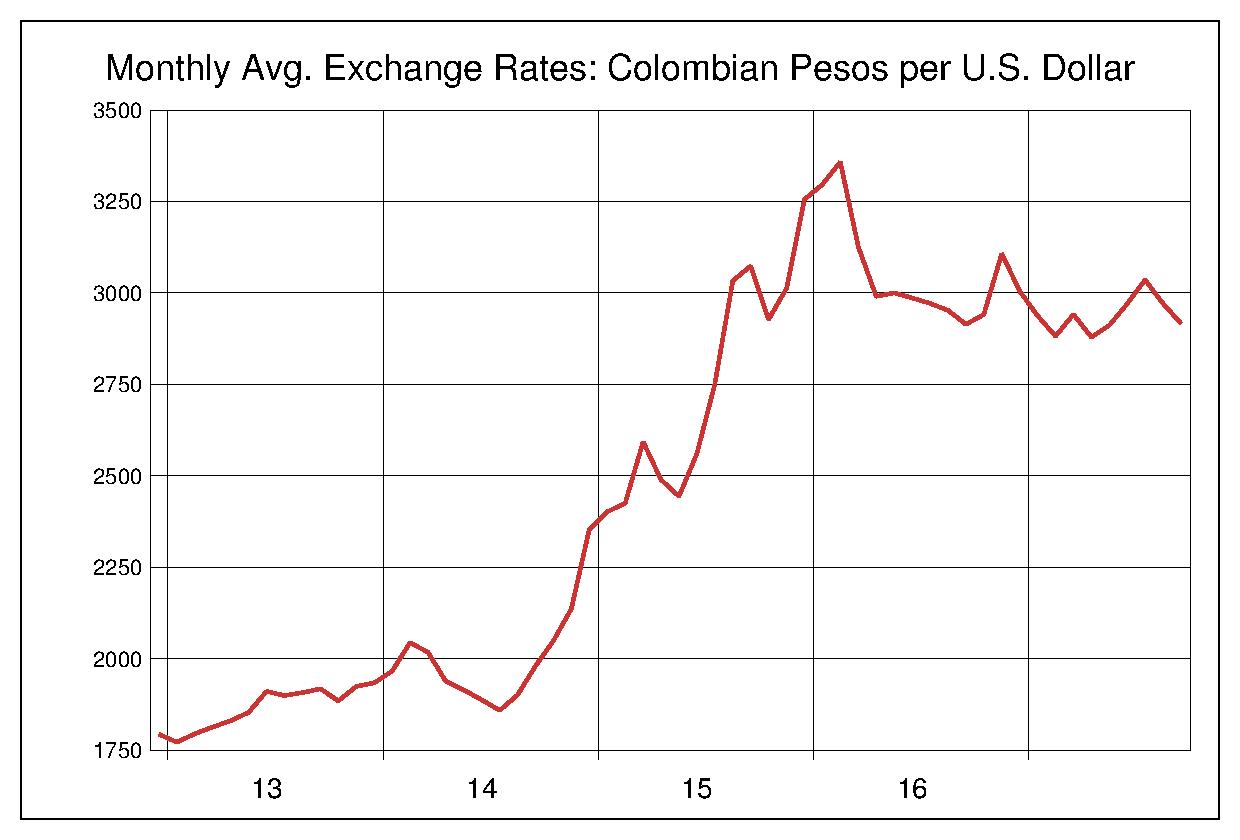 All charts in this report are courtesy of Pacific Exchange Rate Service,
©2017, by Prof. Werner Antweiler, University of British Columbia

Mexico comes in at third place, offering the dollar-holder almost 44% more buying power than it did in 2013. Mexico’s performance did not track with most currencies (its peak occurred later) since it was the only one to suffer the “Trump Effect”… mostly due to the president’s campaign promise to scrap the free trade agreement, NAFTA. Those concerns are now diminished—and the currency has partially recovered—as you can see below. 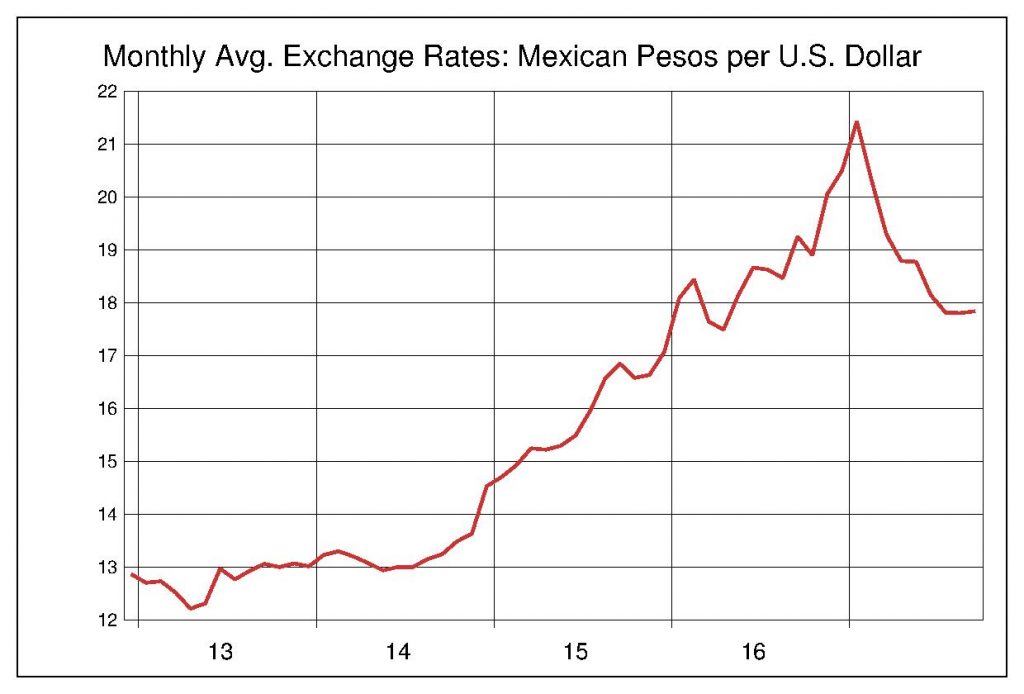 The Trump Effect caused a spike in the dollar’s value
against the peso, which has since diminished

Remember, your advantage in Mexico only applies to properties priced in pesos… not to those priced in U.S. dollars.

Here’s a summary of where we are today, in chart form.

I’m not a currency expert, but I do share a critical skill with real currency experts: We’re both extremely accurate at “predicting” the past (and equally inept at predicting the future).

But reflecting on the past has value in this case. Not so we can bemoan the fact that we missed the peak, but to keep today’s exchange rates in perspective. That is, as a means to know when exchange rates are a good (or bad) deal in relation to the currency’s history.

For me, exchange rates are seldom a deal-breaker. But they do factor in to the overall picture when considering a property priced in a foreign currency… or for that matter, when considering which countries to invest in.

And by historic standards, U.S. dollar-holders still hold an advantage in many key markets around the world.

Piriápolis Is A 1950s Style Town? Complete with all the sexism, racism, and all the other backward realities of the 50s?

Uruguay has less sexism, racism, and homophobia than any place I’ve lived, which includes 50 years in the U.S. So no, that’s not how to characterize Piriápolis.

However, Lynn does point out the risks of using these kinds of metaphors, which are based on an assumed, shared cultural experience. The term “life in the 50s” generally refers positively to a simpler, wholesome, and more neighborly time.

But those who are black, gay, or in some cases female may conjure a less-positive image of the 50s.

My husband and I are discussing a vacation home in Puerto Vallarta and are traveling there next month for a visit. Although we have been there as tourists, we are not completely familiar with the different areas of town.

Could you suggest a good realtor that would be willing to show us the different areas while presenting the pros and cons of each so that we could narrow down our choices?

Also, are you familiar with any documentation that we could read that describes that kind of information?

I’ve got a few previous essays that will be of help: a Puerto Vallarta overview, and also a look at PV’s neighboring areas. There’s a link to a real estate agent included.

And for another perspective, here’s an essay comparing Puerto Vallarta to Mazatlán.

If your goal is to experience life as a resident, I’d suggest getting a short-term, furnished rental in one or more areas that you think you’d enjoy. It’ll be a far different experience than staying in a hotel, and will quickly give you a feel for what it’s like to live there.

After living in the Phoenix area for nearly 37 years, I would like to experience the Pacific Ocean, and Mazatlán really looks like a good spot to give it a try. In fact, I’ve been planning my move for a while now, and I’m leaving within the next 10 days or so.

I’ll be crossing the border at Nogales, I have my Mexico Visa attached to my passport, and I’ll be taking my household goods in a small trailer.

I hope you can answer a few questions for me: Is Mexico’s State Highway 15 a safe, four-lane highway all the way to Mazatlán? I agree with you… it’s a two-day trip for me. Can you recommend a place to stay along the way?

I’m hoping I can find the immigration offices in Mazatlán as soon as I get there to obtain my residency card and maybe the truck permit and registration.

Again, thanks very much for all your contributions to LIOS. I’ve heard you at a few conferences, but never had the chance to come up and shake your hand.

P.S. Hope to see you on the boardwalk some day!

Congratulations on your pending move!

Yes, Highway 15 is good all the way to Mazatlán. Basically, you get on U.S. Interstate 19 in Tucson (which turns to 15D in Mexico), and stay on it until you see the exit for Mazatlán. Since you’re bringing a trailer, I’d make the first day a shorter one, staying in Ciudad Obregón. That’ll give you some extra time to allow for customs inspections.

Be sure to have a detailed list of the contents of your trailer, in Spanish, with the current estimated value of what you’re bringing in (I used garage sale values). It’ll save you time in customs.

But don’t wait to get your truck permit here at the immigration office. You should have it for the way down, along with your Mexican car insurance. You can get your vehicle permit online here, or get one at the consulate in Phoenix.

And you may indeed see me on the boardwalk… it’s almost empty this time of year.