Granada, Nicaragua: Our Favorite City In All Of Central America

The Best City To Shop For Your Spanish Colonial Home

Granada, Nicaragua, is my favorite city in all of Central America. This is saying a lot, given the number of popular retirement spots I’ve visited over the past 15 years… especially in Panama and Costa Rica. 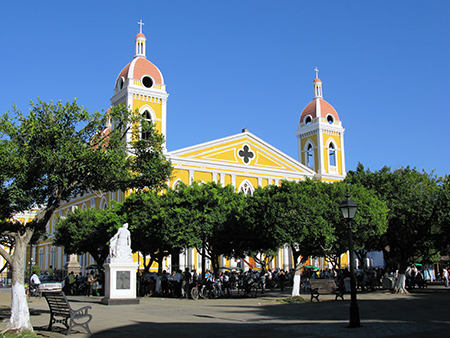 The bustling town square is large, shady, and energetic

Granada sits at the north end of Lake Nicaragua, with beaches within walking distance of downtown. Just offshore, you’ll find a group of small private islands called Las Isletas… several of which are for sale.

The city also lies just south of the well-known Lake Apoyo, Nicaragua’s largest volcanic crater lake. Here too, you’ll find properties for sale overlooking the lake from the rim of the extinct volcano.

Best of all, Granada still feels very authentic… Nicaraguan. You’ll see the old ox carts lumbering through the streets, and the towering cathedral… as well as the local delicacies, crafts, and pottery offered by Granada’s street vendors around the square.

Granada offers a unique blend of native Nicaraguan city life and expat amenities. From the first time I set foot in Granada in 2004, I found it easy to understand why it’s so popular with North American expats.

But what sets Granada apart from all the competition is the impressive inventory of Spanish Colonial-style homes. 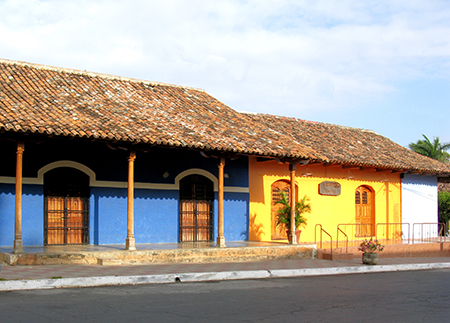 Granada has a wealth of well-preserved Spanish Colonials

If you’re not familiar with the Spanish Colonial style, it’s the type of city dwelling that’s fairly plain on the outside, with its rooms built around a center courtyard on the inside. It’s a style designed for an environment where the houses are built against one another with no room for an outside yard… hence the “yard” is inside the house, where it’s private, often lush, and open to some of the home’s living areas.

If you haven’t seen a Spanish Colonial, here’s a beautiful example from downtown Granada.

After more than 15 years of actively looking, I haven’t found a better market for this type of home.

Granada usually has a good inventory of colonials in a good state of restoration. Granted, colonials can be found in plenty of places around the Americas… but there are a few things that set Granada’s real estate apart: 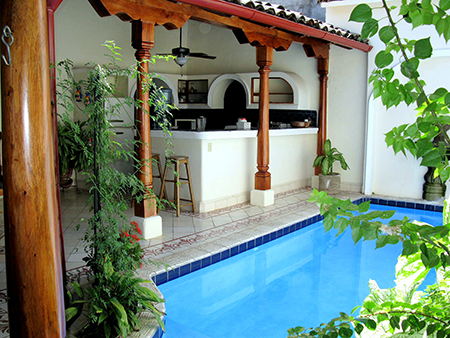 Founded in 1524, Granada claims to be the first European city founded in mainland America registered in official records of the Spanish Crown.

But while the city is colonial, most of the homes standing today are not actually from the colonial period (pre-1821). American invaders burned the city to the ground in 1856, and only a few homes remained. Most of the “colonials” I refer to in Granada are actually from the late-19th or 20th centuries, built in the Spanish Colonial style.

Granada is built around a large, shady and bustling town square, anchored by the stately, neoclassical cathedral at one end. The streets are narrow—built prior to the automobile—and lined with rows of cheerful, well-kept Spanish homes.

One downside to Granada is that it can be hot. I don’t really find it unpleasant, but I do sleep with the air conditioner on, as will most people. The seasonal average high temperatures run between 86°F and 93°F (30°C to 34C°). Average annual rainfall is moderate at 47 inches, although most of that rain comes between May and October in the form of afternoon showers. 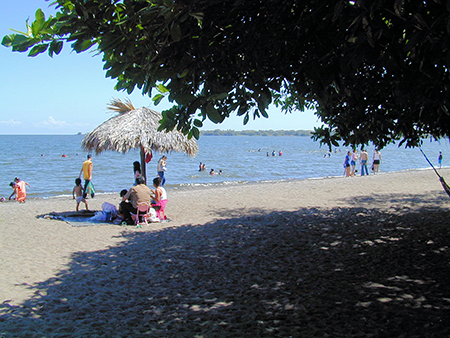 Also, if you want to be a pioneer—one of the first few expats to discover a city—then this isn’t the place to do it. The expat community is not that big (and has brought some nice amenities) but there are definitely a fair number of English speakers already in residence.

Property Prices Are Still Reasonable When Compared To Most Colonial Centers

I’m always surprised that prices here have not inflated like they have in most markets where colonial homes are available. As you’ll see, properties are still quite reasonable.

The rental market is good in Granada, especially if you have a pool. Occupancies in prime locations can run between 65% and 75%. If you have a small home near the central plaza, a 70% occupancy will result in a gross return of about 14%, based on prices I’m getting today for weekly rates. The farther you get from the town plaza and the larger the home, the smaller the return will be.

I find that this market is not very liquid, though, so don’t buy a home thinking you’re going to quickly flip it to make a fast buck, unless you’re buying something special or undervalued.

Keep in mind that courtyard homes are often not 100% air-conditioned. Those areas open to the courtyard won’t be, while bedrooms normally are.

In the fixer-upper department, there’s a three-bedroom home available in the historic center, about five blocks from the main square. It’s an easy walk to the city’s restaurants and shopping. Given the low restoration costs, you could have a nice home (and well-performing rental) for less than US$100k. The asking price is US$59,000.

Casa Rañita is located just one block from Calle Calzada with its restaurants, shops, bars, and cafés. The real estate agent suggested installing a small pool in this one, and I agree… this could be a high-performing rental with a pool. It has two bedrooms, two baths, and a small interior patio. The asking price is US$85,000.

This is in a great location across from the San Francisco convent. Nicely restored using high-quality standards, it even includes a pool in the courtyard. The house comes with three bedrooms and three baths, with 250 square meters of living space (almost 2,700 square feet). From here it’s an easy walk to restaurants, markets, and shopping. The rooftop sitting area gives you a view of much of downtown Granada. The asking price is US$225,000.

Also centrally located near the San Francisco convent, this home is of the colonial style, but was built in 2006 by an American couple. The finishings are very well-done, right down to the authentic bamboo ceilings and hanging fans. The home has two bedrooms and three baths, and comes with an inviting pool in the courtyard. There’s a great view from the master bedroom balcony, and the asking price is US$169,000.

Is Granada For You?

Nicaragua offers easy residency and generous immigration policies. More importantly, though, I’ve always found Nicaragua and its people to be warm and welcoming.

Remember, Granada is always warm-to-hot, so you’ve got to like warm weather to be happy here. Most of us should plan on using the air conditioning.

If you’d like to buy a Spanish Colonial property, or would enjoy the Spanish-American lifestyle, then Granada should be high on your list. The cost of living is low, the properties are inexpensive, and the inventory of colonial-style homes is amazing… especially at these prices.

I lived in northern Spain over 10 years ago, and I’m now looking into buying a beachside café/bar in Marbella on the Costa del Sol. As you know, this is a seasonal location for many northern Europeans.

Today there are some nervous people worried about Brexit and the impact on expats living and who own businesses in Spain.

What are your thoughts for this decision and potential challenges if I do proceed?

The truth is that no one knows what the impact of Brexit will be, but I’ll pass on some food for thought.

I think expats and property owners will make out OK. The best-case scenario is that some accommodation will be made for those living in Spain which will allow them to stay. At worst, they’ll need to apply for residency… but they’ll likely have some special allowances.

If I had a business, however, I’d be concerned… for a few reasons. One is that the market is very mature and fairly saturated, so the upside potential for a tourism-related business was not great anyway, pre-Brexit… especially when compared to a newly developing market.

And given that it’s very likely to be more difficult for the British to set up house in Spain, I can’t see a scenario where the British population would increase.

To me, starting an expat/tourism business now on Costa del Sol would be entering a competitive market with a declining customer base. It’s the sort of thing one would do to pursue a dream, but not to make money.

I know much of your publication is dedicated to retirees. I’m only in my 30s, yet I love travel and culture and women.

Do you have any suggestions on what would be the best places for a great social life with the most beautiful women?

This is a subjective call, but I’ll give you my two cents…

I’d put Madrid first, and Medellín, Colombia, as the runner-up. Madrid is my personal favorite, but both cities easily qualify with fantastic social scenes and beautiful ladies.

And it’s not just the ladies… my wife claims the Spanish men are more remarkable than the women (although she ranks Uruguayan men second).

But when you throw in investment potential, a growing middle class, low cost of living, and good property values, Medellín is the easy winner.

I am interested in investing in organic Hass avocado trees in Panama. But I’m wondering how much money the investor actually makes from the US$45,000 purchase after four years.

I understand money goes to management care, crop fees, and a split with the management company. Are these expenses tax-deductible?

How much of the projected US$10,000 in earnings is left for the investor?

Thanks, and keep up the good work, Lee!

The projected US$10,000 to US$11,000 in earnings is net of the crop care fee and management company split. It’s all forecast to go to the investor.

And accordingly, those fees would not be deductible by the investor.

You can learn more about the organic Hass avocado investment here.