What’s the best predictor of a country’s future prosperity? It’s not GDP, inflation, or unemployment rates… It’s a growing middle class. There’s no agreed definition of what middle class is. It generally means that you earn enough to take care of you and your family’s current and future requirements, owning a home, being able to educate your children, having access to adequate health care, and having disposal income. The regions of the world with the fastest-growing middle classes right now might surprise you…

They are not in the United States or European Union. Western growth rates are slowing, populations are aging, and debt is piling up.

The American middle class has shrunk by 18% since 1971, dropping from 61% to 50% of adults. This is a reduction of more than one-third of a percent per year, which adds up over time… 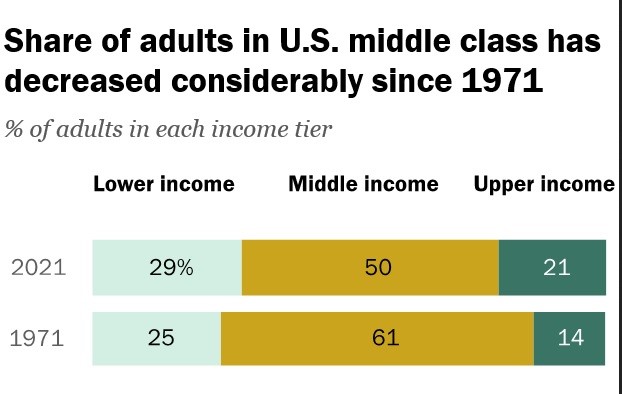 You might look at that chart and ask, “So what? The rich are getting richer in America, so the money is still in the economy.”

You’d be wrong. Wealth that flows to the upper class is hoarded or taken offshore, never to be seen by the U.S. economy again. 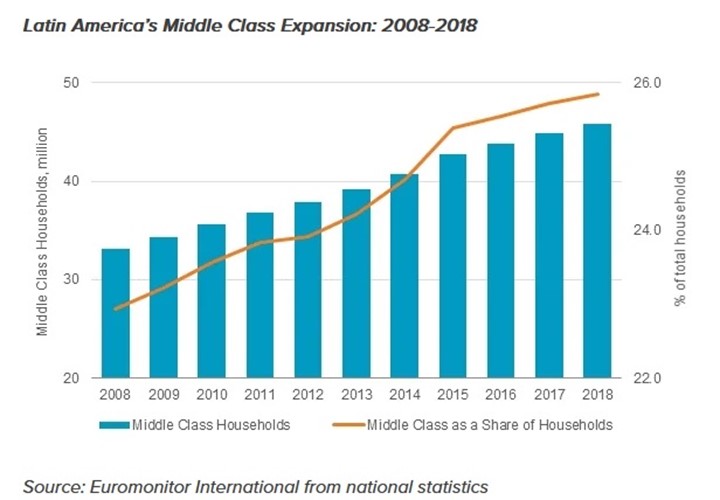 It shows an average of all Latin American countries, obscuring the stats of the countries that are excelling on an individual level.

Panama’s middle class has money to spend to drive economic growth, educate their children and increase the productivity of the workforce, and invest in their economic future.

This bodes well for Panama. Its economy is so strong, it’s estimated that it will join the ranks of first world nations by 2030, leaving its developing nation status behind.

This is an indicator of Colombia’s strong long-term prospects. The middle class is still currently 20% smaller than in the States, but it’s growing while the U.S. middle class is shrinking. 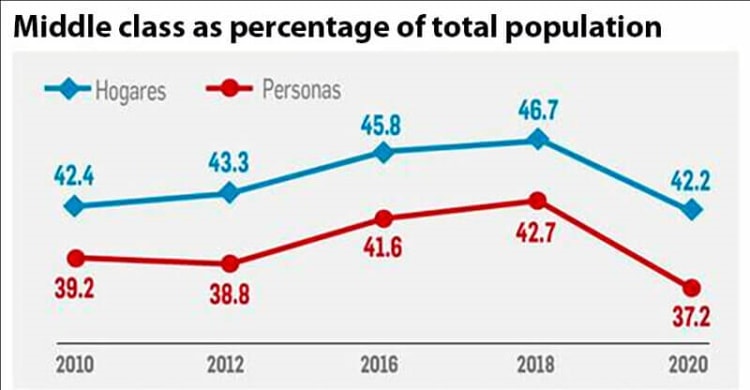 There was a drop in middle-class membership leading up to the pandemic, but this trend is already reversing.

Other Indicators Of A Strong Economy

Life expectancy in the States has slowed its increase over the past few decades. It dropped by almost 3 years, from 78.8 to 76.1, during the pandemic.

Panama’s life expectancy has increased steadily over the past two decades. It’s now at 79 years, significantly higher than the United States, and it’s on track to increase even further. 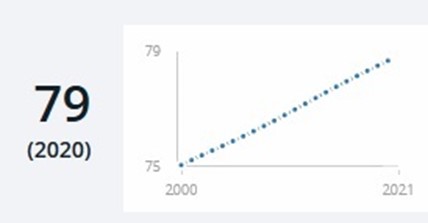 Colombia’s life expectancy is now at 77 years after rising dramatically since 2000. 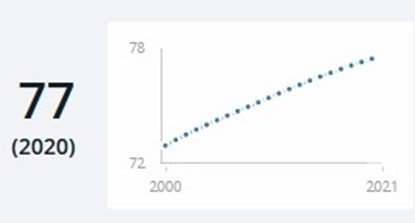 While Mexico’s life expectancy is the lowest on the list, it’s increasing, and it’s only 1.1 years below the United States.

National debt-to-GDP ratios are a strong indicator of a country’s future solvency. They compare how much a country owes versus how much it produces in a year.

A healthy debt-to-GDP ratio is generally considered to be under 100%.

The U.S. debt-to-GDP ratio is astronomical. It’s far beyond any World Bank metric allowed for a developed nation. The States doesn’t seem to have a plan to cut its debt ratio anytime soon, either.

Colombia’s debt-to-GDP ratio is at 90.4% and Panama’s is an enviable 63.6%. Mexico sweeps the boards with an incredibly low debt ratio of 53%.

Panama and Mexico’s low debt levels predict resilient economies, with room to maneuver and borrow in the case of future economic slowdowns.

If someone were to take a look at these statistics, they might think that the U.S. economy is so massive that it outweighs all the other long-term factors… But size can’t outweigh the laws of economics forever.

Considering all these factors—size of middle class, life expectancy, and debt-to-GDP ratios—it’s clear that Latin America is the investment destination of the future.

The question is: How can you profit from the Latin American middle-class boom?

The answer lies in another indicator of middle-class membership… Home ownership. In Panama, there is a huge demand for middle-class housing. Take a look at this government report about local housing… 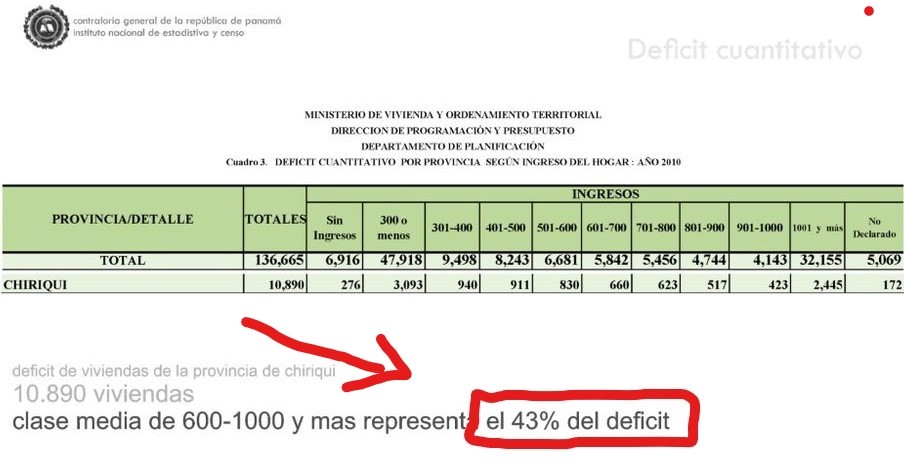 This is a crisis.

So much of the construction in Panama is for the investor and foreign buyer market. Local families desperately need quality affordable housing…

Just five minutes outside of David, capital of Chiriquí Province, a well-known developer is building high-quality housing for the local middle-class market.

The developer owns 43 hectares of prime land next to the David mall and 500 meters from the hospital and international schools. The government has just allocated funds for a new road to the airport directly from the development.

The developers are building so many of these homes at once, they need bridging finance to keep the construction going.

They put up the land, you pay for the construction of the house, and you split the profits when they are built in two years. This is an investment in a home finance deal, not a property investment for rental returns.

Early investors have already been paid their profits and are so happy with the developer that some are reinvesting.

These houses will be sold to middle-income locals for just US$89,000—lower than other middle-class homes in the area. 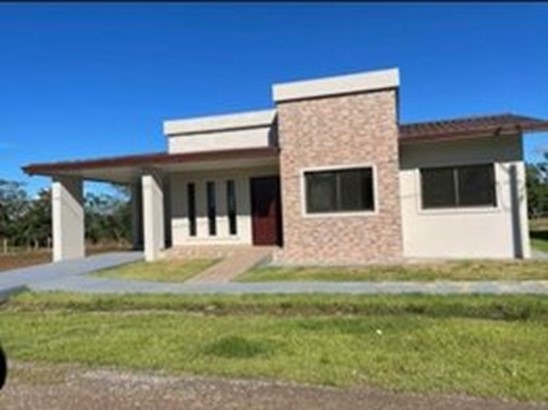 The developer has a 20-year track record delivering quality housing in Panama. They are well known, well respected, and well capitalized.

The government’s support for middle-class housing developments is undeniable. It has created a US$1 billion fund to get these houses and others like them built.

The last factor to assess is the buyers of the project…

During the pandemic, foreign property buyers dried up around the world. Local demand for affordable housing continued to grow.

With a developer with a proven track record, a government bending over backwards to help the development, and huge local demand for affordable housing, this deal is as close to a sure thing as possible in the real estate industry.

Get in touch with our team now for full details of this opportunity.

Construction is being done in eight separate phases. Each phase will contain 5 to 6 hectares and around 50 homes, as well as 30% to 40% of green spaces, which will include parks and playgrounds.

All three of the first phases are estimated to be complete by the end of 2023.

They are sustainable luxury homes. The ceilings are 4.5 meters (14.7 feet) high to aid air movement and natural cooling.

This project falls under the local preferential interest rates. This means the government will offer mortgages to locals at a rate of 1% to 3 %. Interest rates are usually around 7% in Panama, so this is a huge assistance to local families. The government will also give local buyers who earn less than a certain amount US$10,000 toward the price of the new home.

With this investment opportunity, there are no tenants, no hidden costs, no stamp duties or HOA fees, and no finding buyers or renters… the developer does everything. This is as turn-key a property deal as possible.

Plus, this deal is accessible to smaller investors, too, starting at just US$59,000.

If you’re looking for a high-ROI, short-term cash investment that is asset-backed, government-approved, and community-supported, this is the opportunity for you.