I agree. What’s the point of moving overseas just to end up in the same type of American community you just left?

To find a new style of living, some more adventurous overseas buyers seek out communities that live by ideals that they agree with and decide to move into an intentional community (IC).

These communities are founded by a group of like-minded people and are run democratically.

The difference between a development with an HOA and an intentional community is how the community is formed and how members interact with each other.

A development is simply a collection of houses built on the same site, with the sole purpose of providing accommodation for its members.

People buy into them because of the price or location, not due to ideals. No real effort is made to create a sense of community at the outset, and neighbors often don’t know or don’t want to know each other.

An intentional community is better described by the Fellowship for Intentional Community as “a group… that have chosen to live together with a common purpose, working cooperatively to create a lifestyle that shares their core values.”

It sounds a bit hippy. But believe me, a well-balanced intentional community can be an amazing and fulfilling place to live.

Intentional communities aren’t cults or communes. Cults have a single leader and a power hierarchy. Communes usually share all possessions, and no one owns any specific piece of land.

Some common intentional community ideals include eco-communities based on environmental sustainability or permaculture, raising and educating their kids how they choose, or freedom from municipal oversight, spiritualism, veganism, and many others.

Some people consider co-housing or housing co-ops intentional communities, but as they are only focused on accommodation, I don’t categorize them so.

Eco-villages are probably the most common intentional community today, with the aspiration of achieving ecological harmony, producing their own power, food, and other services for themselves with minimal environmental impact.

Requirements And Pitfalls Of An Intentional Community

If the idea of living in an intentional community sounds interesting to you, you must also be aware of the requirements and pitfalls…

The vision statement is an important first step for any intentional community.

If you can’t agree on what the actual vision and goal is for the community, you won’t be able to achieve it.

Some intentional communities only offer shared land ownership or short-term land leases. I would never build a house on land that I didn’t own. If you ever wanted to leave the community, you will have great difficulty in getting anything like the true value for your home.

Community areas and buildings can be held in common, but community ownership of homes in which people live can get complicated and litigious.

Intentional communities fail at an even greater rate than business startups. Lack of experience in developing property, lack of finances, lack of clarity over vision, and lack of willingness to cooperate are just some of the reasons.

I strongly recommend that you buy into an existing IC, and not start your own or join a fledgling IC, unless you are well financed and have a strong like-minded group already willing to join with you and work hard.

Internal disagreement and conflict can damage or destroy the morale of the entire community.

Proper procedures must be in place for when conflicts happen.

Retain a lawyer with experience in creating community charters, particularly dealing with voting and conflict resolution.

It’s vitally important that you vet potential community members before they buy into the community.

The more your community regulates itself, the more important this is.

Emotionally unstable, immature, and mentally ill people who refuse to get professional help are often attracted to intentional communities and the alternative lifestyle that they offer.

These people are nearly guaranteed to cause huge disruptions to the development of the community, and some can be so toxic they can destroy the entire lifestyle you are trying to build together.

Crazy neighbors aren’t as much of an issue in ordinary developments, but in ICs, where you have committed to closely working with a group to achieve your ideal community life, unbalanced people can cause huge grief for everyone else.

One of the biggest differences between an ordinary developer and a creator of an intentional community is the founders’ willingness to refuse to sell property to someone who lives contrary to their ideals.

Founders should take time to consider if they can work together, because agreeing to join with people with different visions or personalities can lead to conflict.

Joining an existing community that is off the ground can be a great way to avoid beginners’ conflict or early-stage changes in vision.

You need to decide who will lead the community, how often elections will be held, or if all decisions will be decided by a direct vote.

Community members directly voting on every issue will make the process more difficult and time-consuming.

If you decide to join a community that will absorb more members and grow into a village or town, be aware that the power of your vote will be diluted by new members joining, who can change the community vision by election.

The source of the money to purchase the land and put in infrastructure materially affects the power structure of the community.

A community that is developed by an experienced property developer that sells parcels to new members can provide assurances that the development won’t fail before it starts.

If the community is developed by a founder’s group, having all founding members put in equal amounts of start-up capital can avoid power gaps between members. If everyone gets the same vote despite what they invested, it quickly causes strife in a community forum.

Community members’ personal desires and agendas will cloud their perceptions of what is discussed and agreed at meetings.

Ensure minutes of every meeting are kept and circulate them to all community members soon after the meeting to prevent misremembering and outright denial of what was agreed.

This is one of the biggest attractions and greatest frustrations of being part of a self-governing intentional community.

Ensure that you inform all members in writing what the monthly fees and management structure will be before they pay to join the community.

If you set your community up as a not-for-profit organization, you might be able to get tax exempt status for some or all your on-site activities.

Many intentional communities fail at the outset by buying land in an area where it is difficult to get permission for what you are doing. Do proper research first.

Especially in rural areas, older neighbors might mistakenly fear that this new community in their midst will bring drugs, a religious cult, or a hippie commune to their conservative town.

Take the time to meet your future neighbors before buying your property… it’ll make getting the planning permission and community integration easier.

Where Can You Find An Intentional Community?

I worked at Carmelita Gardens in the Cayo district of Belize on and off for years.

Cayo is my favorite part of Belize because of its laid-back atmosphere, closeness to nature, and the great calibre of expat it attracts.

Carmelita Gardens is a wonderful example of a resilient intentional eco-community on the beautiful Belize river where everyone generates their own power, collects their own water, and shares a communal garden.

These off-grid attributes are what make Carmelita Gardens an eco-community. 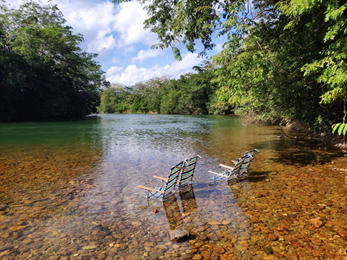 What makes Carmelita Gardens an intentional community is how the residents have come together over the past decade to create a community of physical and emotional support for each other.

They help and care for each other and the local villages.

Sharing an ethos doesn’t mean the community members have to be homogenous. In Carmelita Gardens it’s different.

Everyone—republican or democrat, vegan or hunter, retirees and young families—gets along precisely because they are different, because they all subscribe to the community vision which is living “independently together.”

They are independent, eco-friendly, and self-sufficient, but they rely on each other for support, connectiveness, and the shared purposes of building a community that every member is a part of.

They cherish new members and value their outlook but don’t dictate how they live.

Decisions about the development are managed by a community vote.

There is no risk here of failure like there is in start-up intentional communities, as Carmelita has been in operation for a decade. 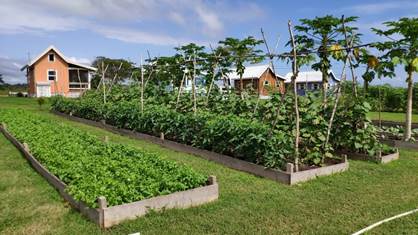 The infrastructure is built and a viable community is already on-site. The vision has matured, and early teething problems have been ironed out.

If you want to see how an intentional community operates when its properly set up and administered, and what a happy connected community looks like when it matures, look no further than Carmelita Gardens.