The cost of home heating is already double what it was a few months ago, and we aren’t even into winter yet.

Financial advisors tell us to ride out the coming economic turbulence by cutting back and consuming less… even turning down the thermostat this winter until you can see the frost on your breath.

But it doesn’t have to be this way… There are simple things you can do so that you never have to worry about heating or cooling bills again.

Many Germans, for example, are future-proofing against rising energy costs by moving to countries where it doesn’t get cold in winter or too hot and humid in summer.

This removes the need for heating and air conditioning—two of the biggest household costs in many parts of the world.

Planetary scientists have a term called the Goldilocks Zone, which refers to places that are not too hot and not too cold. They’re just right…

Thanks to modern engineering, we can expand the horizons of the Goldilocks Zone to include places outside this range. By using super-insulated materials and smart designs, modern houses can use 95% less energy to heat and cool themselves than conventionally built houses. You can live in more extreme climates without paying any extra to feel comfortable.

Some are taking this a step further and insulating against future utility price increases and power failures by running some or all of their homes off-grid.

When I got my start in the real estate game over 20 years ago, it took years to pay back the initial investment in a solar power system. Those older systems were a pain in the neck to keep running. You needed to top up your battery fluids monthly, maintain your back-up generators weekly, and check your power levels daily.

Older solar systems only made sense if you lived in a very sunny climate and had money to spare. Today, things are different. The price of solar systems has plummeted.

Solid state gel batteries that don’t need maintenance are now common, and computers run the systems and do all the monitoring for you. Once purchased, a good system should only require an annual service by you or a technician.

Today, a properly sized solar system can pay for itself in less than a decade, and if energy prices continue to rise, that payback period could be even shorter. If you have an electric or hybrid car, you could use any excess power to get around for free—an advantage when fuel supplies are disrupted in the future.

In many countries it’s possible to connect your solar system to the power grid and sell excess power to the utility company. This enables you to make money from your home even when it’s unoccupied. Grid tying could also remove the need for a back-up generator from your initial system cost.

Tips For Setting Up A Solar Power System:

Water supply is another long-term issue you’ll want to factor into your move-abroad plans. Parts of the United States have already run out of water, forcing residents to leave their homes and farms or have potable water delivered by truck. This isn’t sustainable.

Ideas like digging wells on your property are great… but what if you live in a condo or all your neighbors drain the aquifer below you and your well runs dry like we’re seeing in Texas today?

There are two options to ensure your comfort in case of disruptions to your municipal water supply: rooftop rainwater catchment and collection tanks and newer atmospheric water generators (AWGs).

Water generators produce drinking water out of air by condensing and collecting the moisture from it. It’s the same mechanism that air conditioners use, but they don’t cool the air after removing the moisture. This means they draw considerably less power than air conditioners, and when used in an air-tight or passive energy home, you get the double benefit of clean water and decreased humidity at the same time.

Relatively inexpensive home AWGs usually produce up to 30 liters of water per day and only draw 300 to 400 watts of power per hour. Thirty liters per day is ample for drinking, cooking, and bathing for two people in an emergency. If you want more than this, you can get a bigger or multiple systems.

Using AWGs in conjunction with a home solar system provides a practically free source of clean water and home dehumidification. A single solar panel could run this system during the day. 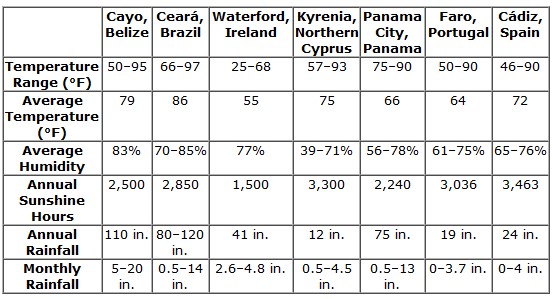 Nowadays nearly every country is suitable for solar power generation… Even not-so-sunny Ireland. My brother has a solar power system next door to me here in Limerick. That said, the more sunshine a country gets, the more efficient a solar system you have.

Belize is a great destination for self-sufficient living. I lived in Belize for 14 years, including in several off-grid homes that had every modern electrical appliance imaginable. With 2,500 hours of sunshine per year, you can power your home with a small solar power system in Belize.

Belize is pleasantly warm year-round; temperatures stay above 50°F and below 97°F, so you can live without air conditioning or heating. It can get too humid at times, but it’s nothing a fan can’t help. Air conditioning would be nice to have, and a well-insulated home can make the energy required minimal.

With over 100 inches of rainfall per year, you can become water independent in Belize. You’ll need large cisterns to see you through the dry season. Belize’s high humidity levels makes atmospheric water generation a viable option, too.

Belize’s Cayo District, with its rugged, wide-open spaces, is my favorite part of the country. I’ve lived and worked at Carmelita Gardens, a model community for self-sufficient living, where residents generate their own power, collect their own water, and share a communal garden.

Carmelita Gardens offers turn-key house and lot packages starting at US$159,900 for solar-powered tiny houses. Off-grid bungalows start at US$224,000, and off-grid luxury villas begin at US$269,000. For more information about Carmelita Gardens, go here.

Northern Brazil is well suited to off-grid living, with 2,850 hours of sunshine per year for solar power generation and high rainfall for rooftop collection. You wouldn’t need atmospheric water generation here, but given its high humidity levels, an AWG could be an alternative to air conditioning. A well-insulated home could easily run air conditioning from a small solar system.

Home food growing is possible year-round in Northern Brazil, though if you’re close to the ocean, you’ll have to improve the organic content of sandy soils or use modern soilless growing techniques like hydroponics.

To find out more about low-cost modern ocean-view bungalows that would be suitable to upgrade with off-grid packages starting at US$77,000, go here.

Waterford is one of the sunniest parts of Ireland… but that’s only relative to the rest of the country.

Southeast Ireland is the least suitable destination for solar power generation in this report, with only 1,500 hours of sun per year. However, generous government grants make home solar systems economically viable. Wind power could be more suitable if you’re located in a breezy area.

While traditionally too cold to go without central heating, all new houses in Ireland must now meet near passive housing design standards, but older houses might need upgrading. This will include replacing the heating systems with air-to-water heat pump systems which are four times more energy efficient than conventional electric heating.

You won’t need an AWG in Ireland, but you will need better home insulation.

Ireland has a shorter food growing season but its temperate climate is suitable for growing many cool weather crops. Production in a greenhouse is easier.

With only 12 inches of rain per year, an AWG would be your best option to become water independent, though periods of low humidity will affect your ability to generate water at certain times of the year.

Northern Cyprus is supplied with fresh water via a pipeline for agriculture from Turkey. While growing your own food would be more challenging in Northern Cyprus without a municipal water supply, using modern, low-water production techniques like hydroponics or aquaponics would make farming using just AWG systems viable.

Panama City and the surrounding areas are suited to solar power generation with 2,240 sunshine hours per year.

The high rainfall makes rainwater catchment viable, but given the humidity levels, an indoor AWG system would be comforting. You might want to get more panels and run an air conditioner.

If you want cooler weather in Panama, Boquete is a great option. Home food production would be more suited to interior and more elevated areas of the country.

Faro boasts 3,036 hours of sun per year, making it ideal for solar power generation and food growing. The moderate-to-hot temperature means air conditioning isn’t required so long as you have fans or a well-insulated home. Also, many homes in the Algarve region come equipped with electric fans to keep the sun out and lower inside temperatures.

The meager 19 inches of rain that Faro gets means that to achieve water independence, an AWG system would be required.

Cádiz is similar to Faro in climate and rainfall but tops our leaderboard for sunshine at 3,463 hours per year. There is a reason they refer to this area as the Coast of Light.