The most valuable convenience you can hope for when purchasing a home abroad is the ability to load up your car and drive to it… it’s one of Mexico’s biggest advantages.

Today we’re going to look at three popular spots on the Sea of Cortez, all within a day’s drive of the U.S. border: Puerto Peñasco, San Carlos, and Mazatlán.

The Sea of Cortez––also known as the Gulf of California––is the body of water that separates Baja California from the Mexican mainland. It starts at the mouth of the Colorado River. The sea is noted for its warm, calm, and relatively protected waters, and for being one of the most biologically diverse seas on Earth.

Anyone who has driven to western Mexico from the United States has likely skirted along the Sea of Cortez.

The towns we’re going to look at today are quite different from each other. But they also have several things in common:

Let’s take a look at three attractive choices just south of the border. 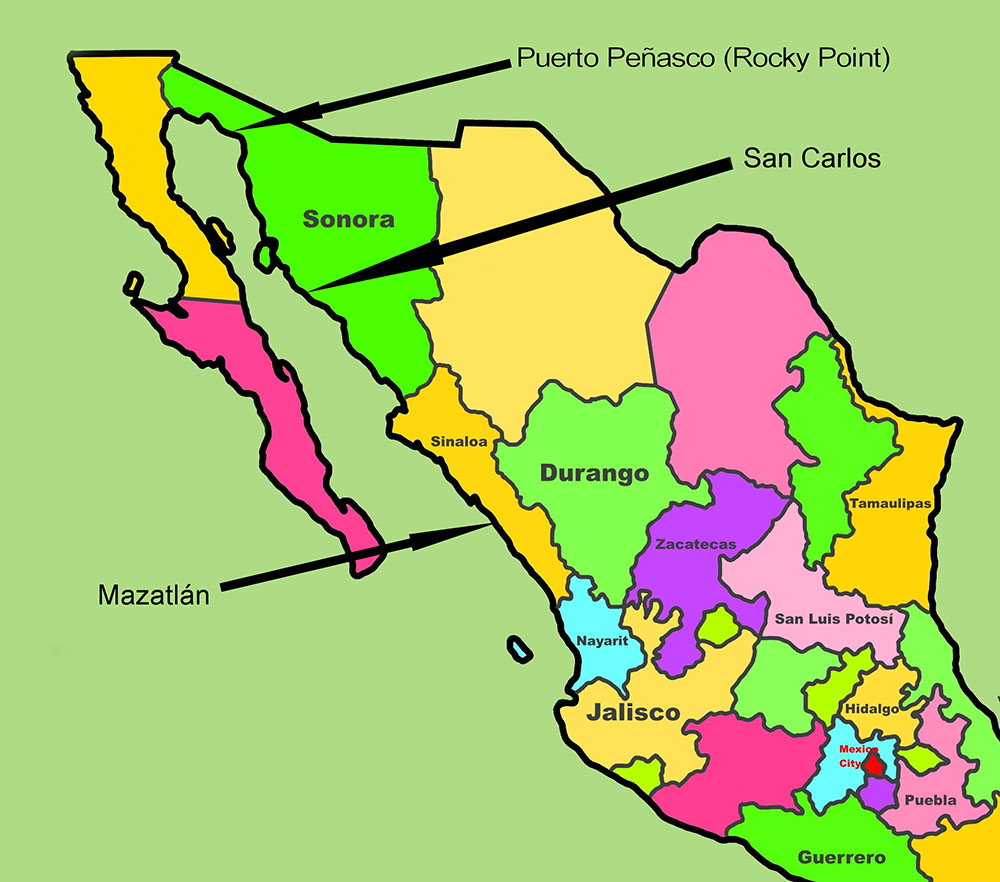 Puerto Peñasco enjoys miles of wide, sandy beaches bordered by the waters of the Sea of Cortez… waters that are warm, clear, and calm all year long. The water is gentle, making it perfect for small children.

For sun lovers, Puerto Peñasco sees 362 days per year of bright sunshine. This is no surprise, since the town is on the edge of the Altar Desert… one of the driest and hottest in the Americas.

And if you’re a boater, you’ll appreciate the large, sheltered marina, which hosts both commercial and pleasure crafts.

Best of all, beachfront homes here are a real bargain.

This popular destination is known as Puerto Peñasco in Spanish and Rocky Point in English. Surprisingly, it had its English name first, named so in 1826 by a retired Royal Navy admiral who was in the area scouting for precious metals. The Mexican president renamed the town in the 1930s.

Any discussion of Puerto Peñasco has to start with the fact that it’s only 62 miles (100 kms) from the U.S. border, a drive that takes about 1 hour and 10 minutes. It’s just over three and a half hours by car from Phoenix, and six hours from San Diego.

Properties in Puerto Peñasco can be quite a bargain, even on the beachfront. I always look for good deals at a development called Las Gaviotas because it’s on the beach and within walking distance to downtown.

Miles of sandy beaches… clear, warm waters… excellent diving… and a large expat community. These are what come to mind when I recall San Carlos.

San Carlos is a popular drive-to destination for people in the western United States and Canada. It’s as far south as you can go in western Mexico without having to get a vehicle permit.

The city was born as a well-planned tourist destination in the mid-1950s… it had formerly been three large ranches. As such, you won’t find a colonial historic center in San Carlos, but you won’t find the poverty or run-down neighborhoods that you might expect in a real city either.

The town has a positive, upbeat atmosphere, bolstered by the abundance of cheerful cafés, bars, shops, and restaurants. Most venues cater to the American and Canadian residents, so you’ll see plenty of burger joints along with a good selection of seafood restaurants.

Sandy beaches highlight the entire area, bordering warm, calm waters. The city sits at the top of a giant cove, and the San Carlos coastline actually runs east and west, rather than north and south. In town, the 1.5 miles (2 kms) of beaches are mostly behind oceanfront homes and buildings. But as soon as you leave town heading down the coast, you’ll encounter over 3 miles (4.9 kms) of beautiful, uninterrupted beach. Heading north, it’s just as beautiful.

San Carlos is a noted diving destination, with visibilities commonly in excess of 100 feet (31 meters) and sometimes over 200 feet (61 meters). It’s also a sportfishing destination and a good place for boaters.

It’s an easy drive down Highway 15 from Arizona, on what they call the “Hassle Free Highway.” (The hassle-free label refers to absence of vehicle permits and customs… not the absence of speed limit enforcement.)

Mazatlán is a long-time, well-developed resort city, which sits on the Mexican coastal mainland opposite the tip of Baja California. It’s a fairly large city, in which the resort areas and historic center are along the coast, while the non-resort sectors—the seaport, tuna fleet, and industrial area—lie farther inland. As you can imagine, most expats and part-year residents live on or near the coast.

One thing that sets Mazatlán apart is that it has a large and well-maintained colonial historic center. Centro has cobblestone roads, a wide boardwalk, bike lanes, wide sidewalks, and great lighting.

What originally made Mazatlán famous were the beaches… about 20 miles (32 kms) of white sand, bordering clear, warm waters, with a boardwalk running adjacent to the beach for about 10 miles (16 kms).

Since Mazatlán is a real city, you’ll also find a good offering of big city amenities… things like hospitals, theater, jazz, classical concerts, and fine dining, along with the waterfront seafood restaurants and beach scene.

The city also has several golf courses and a large marina district with good marine facilities as well as residential developments. Sportfishing is a big attraction in Mazatlán, with a good-sized fleet of boats to service the influx of anglers going for sailfish, wahoo, mahi mahi and yellowfin tuna, as well as the area’s record-setting marlin.

Is A Home On The Sea Of Cortez For You?

Puerto Peñasco is perfect for those who want a convenient, short-term getaway. I think it’s best for the part-time or vacation homeowner. Plus, from the western United States, it’s feasible to go for a long weekend.

San Carlos is within an easy drive of the United States, and offers more amenities to the expat or part-time resident. It’s also a better base of exploration, from which you can discover more of interior Mexico.

Mazatlán is best for full-time or long-term living, offering the chance to combine colonial city living with a beachside lifestyle.

The Sea of Cortez is calm, warm, sheltered, and close by. If you’re looking for an easy-access seaside home, there’s a good chance that one of these cities will be right for you.